I want your everything,
Every single part of you
If you think you can fuck with me
You're going to lose.

U'kettwah, nicknamed simply 'Kett', is from the U tribe located in the Forgotten Springs in southern Thanalan. Quickly figuring out she didn't like the idea of giving her life to satisfy a Nunh, she ran away when she was thirteen cycles old. For a long while during her teen years, she travelled Thanalan with her friend, Z'attano. They became quite close, and still get along to this day.
Currently, she is employed at Twin Heaven's Tea Company by Kasumi Daisho. She acts as the company's resident bruiser and has an intense loyalty to her bosses. 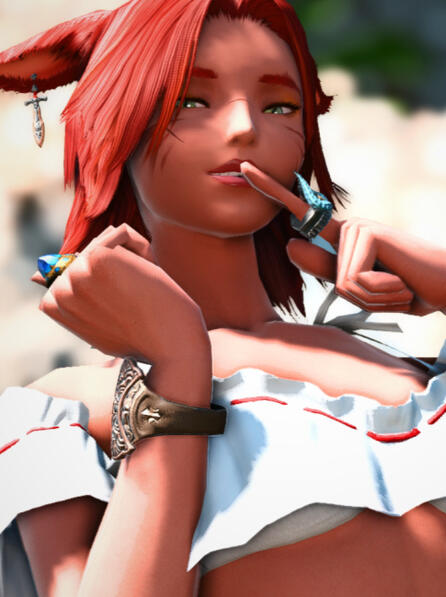 Kett can be found wandering Ul'dah, Thanalan, and Limsa Lominsa. Maybe there's something about her that draws you closer, or perhaps you're looking for something a bit more nuanced?

Kett is very extroverted and likes to talk to people. Lots of folks around Ul'dah might have something to say about her. More RP hooks can be found by hitting the button below. If you'd like to add a rumor that is spoken by your character specifically, feel free to message me about it! (Contact info available under the 'OOC' tab)

Some of these rumors are untrue, speculation, or exaggerated. Please feel free to let me know if you'd like to add your own rumors.

"How come she always has the nicest dresses... but then always has sticks and bugs in her hair?"
"That girl's weapon is bigger than her. I wouldn't like to see if she can use it..."

"Hmm... always hangin' 'round those auri ladies... They seem much more dignified than her. Think she's their bodyguard?"
"Why would a tea house hire a brute like her? What would tea house need protection like that for?"

Rumors here can be heard from player characters and a more creative and unique chance to have involvement with other characters aside from Ito. If your character has something they would like to say about Ito for the realm to know, send me a /tell in-game or message me on discord about it!

Kett is short, standing at four fulms and eleven ilms and surprisingly muscular. Her hair is a bright ginger color, worn loose in a short and messy bob, giving a 'just rolled out of bed' look. The blunt and uneven edges of her hair suggest that she cuts it herself. She has light green eyes, that always have a glint in them like she's hiding something. Her lips are full and have a prominent Cupid's bow. Her bust is a bit larger than the average miqo'te. Kett's evebrows are thick and just as unruly as her hair. She wears a bright shade of yellow eye shadow which shows up nicely on her tanned skin. Her nose looks like it's been broken maybe twice and has a scar cutting across the bridge.

Kett is quite short, standing at only 4 fulms and 11 ilms. Despite her small stature, she it quite strong-- surprisingly so-- and rather busty. Having grown up in the sands of Thanalan, her skin is a nice tanned color. She has many scars, just from living life, though nothing major.

She wields a giant battle axe that looks like it's heavier than she herself is. It's not often that she leaves home without it strapped to her back just in case. 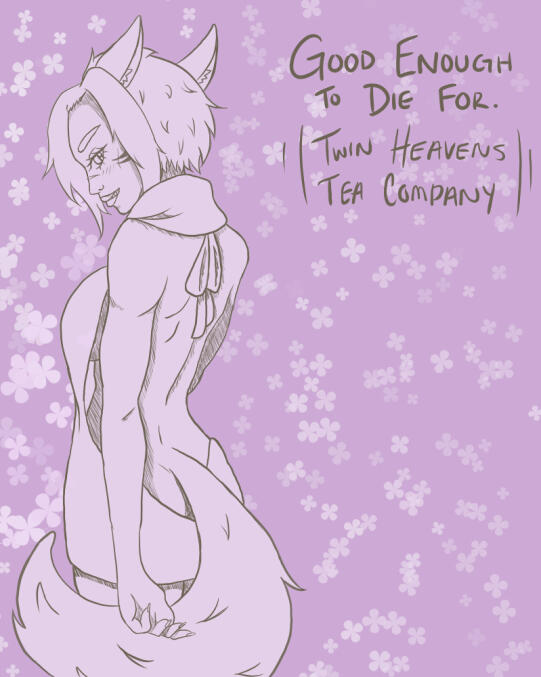 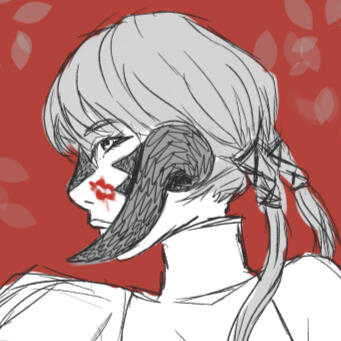 Sokhtai Uyagir
★ ✔ ❣ ≈
Sokhtai is a good friend of Kett, and the head of staff at Twin Heavens Tea Company, making her one of Kett's bosses. Kett often has to make sure that Soktai doesn't have to overwhelm herself and stays available to lighten her workload. For the longest time, Kett has been wholly loyal to Sokhtai, but her recent actions and behavior towards her has shaken her and left her unsure of Sokhtai's perception of their relationship. 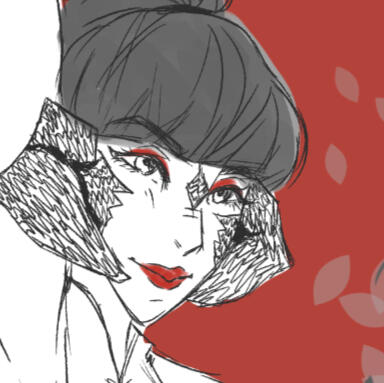 Kasumi Daisho
★ ✔ ❣
Kasumi is the head of the Daisho family and of Twin Heaven's Tea Company. She is Kett's other boss. Much like she is for Sokhtai, Kett is extremely loyal to Kasumi, and protective at times. Kett knows that Kasumi gets lonely easily and likes to pay her visits when she can, and even goes to sleep in her bed with her some nights. 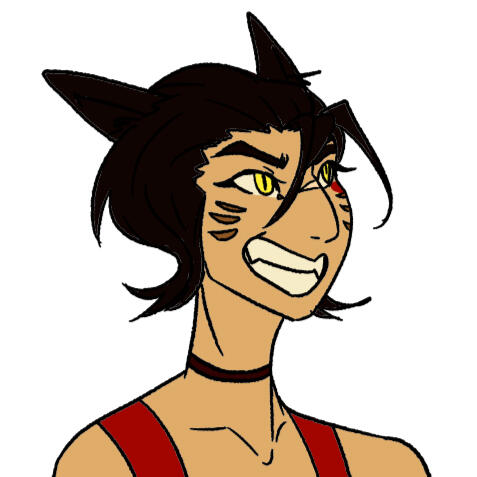 Z'attano Naweh
★ ☮ ♧
Z'attano is an old friend of Kett's from her childhood. After she ran away from her tribe, She and Z'attano roamed Thanalan together. They stayed together throught their teens and parted ways several cycles ago. Z'attano is probably Kett's oldest and most chaotic friend. 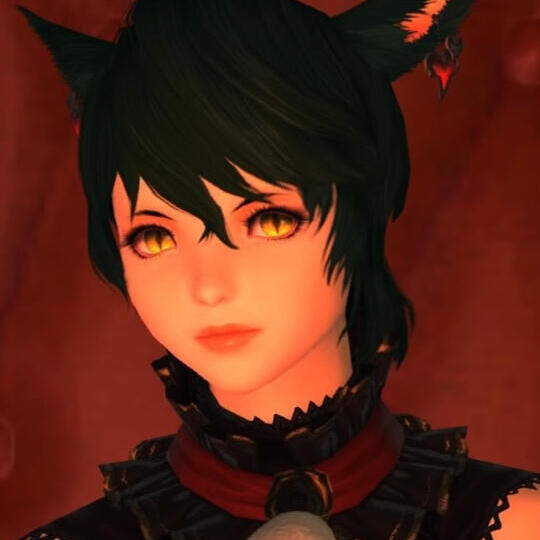 Morgana Borel
♥
Morg is Kett's girlfriend. It took her a while to actually admit she had feelings for her, since she had been in love with both Sokhtai and Kasumi for so long (though, it was unrequited by the two of them). Though Kett loves Morg, words from Sokhtai make her uncertain about her feelings..... "Do you love her or the idea of her?" 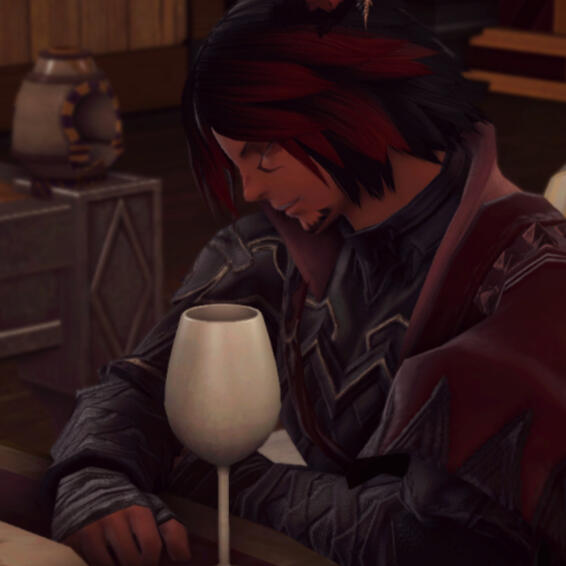 M'razoh Vajra
● ≈
Kett is rather unsure how to feel about Raz. While she used to be at his throat and threatening violence, he still went out of his way to give her a gift for Starlight after they hadn't seen each other for a few moons. As she is trying to work on herself, she thinks it possible that she could at least cordial with him for the time being. 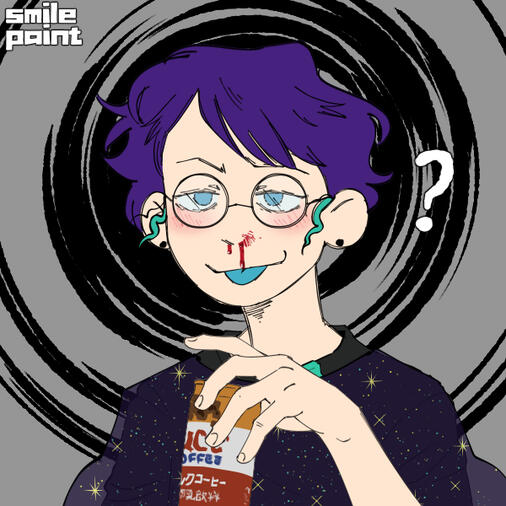 Hi! My name is Em (she/her). I have been playing FFXIV since late 2016-ish and have been RPing since then. This is my first and only MMO, and I love it a lot! As far as RP goes, I also enjoy tabletop gaming, specifically Pathfinder. I love all sorts of RP, though my preferred themes/styles are adventure, dark, mature, and romance. I'm down for really any sort of RP, and while I prefer plot, light-hearted is okay too! I am a college student who also works, so my hours are a bit weird. I'm usually available from around 5pm until around 1am (EST)!

I will:
Combat RP. One-shot RP. Long-term RP. Dramatic plots. Heavy, feeling-driven plots. Romance. Sexual tension. Serious injury. Temporary injury and incapacitation of mind or body. Temporary captivity or imprisonment. Assassination attempts. Rivalries. Deep platonic friendships.
I will not:
Allow lore breaking. Allow my character to be killed. Injury that will leave my character incapacitated. Allow godmodding. OOCly planned romances, except under special circumstances.
Ask about:
ERP. Torture that leaves behind lasting, long-term effects (aka, longer than 3 months). Long-term and/or permanent injury. Long-term captivity or imprisonment. Significant tampering of the mind. Anything that is dramatically character-changing, or may have extremely negative implications for my character.

Don't be a dick and I'll be fine with you. Don't play something that super breaks the lore and I'll be fine with you. I'm willing to put up with a lot of weird lorebendy stuff as long as you're able to give a reason why it actually matters to your character and isn't just for the rule of cool (even though that's the most important rule). Server drama is stupid and if you get involved in it you're stupid. We're here to have fun, so let's have fun!

ERP/Romance: I want the characters to grow and get to know one another rather than just falling in love inorganically. OOCly planned romances are only something that I'm interested in with people I'm already friends with OOC because I know them. 99% of the time, I prefer to fade-to-black instead of writing out a scene.

Combat/Injury: I am okay with either roll battles or emote battles. All I ask is that you don't godmod and accept the consequences of fighting, and I will do the same!

Template for this Carrd was kindly provided by Lucille Levenson! Thank you so much for letting me use your template, you are the sweetest friend ♡